Understanding Loss and The Handless Maiden

"As she completes one round of descent and transformation, she plunges into yet another. All this descending and loss and finding and strengthening portrays a woman's lifelong initiation into the renewal of the wild." ~ Clarissa Pinkola Estes, PhD, Women Who Run With the Wolves: Myths and Stories of the Wild Woman Archetype

I wrote this article because I wanted to share a very important message that may be underlying any loss and upheaval you may be going through. It's a message of transforming suffering into blessings, abandonment into abundance, and betrayal into upgrade.  I'll start with a story....

Although I initially "woke up" in the early 1990s, awakening is a lifelong process with stages that don't necessarily occur in a linear fashion. When I say "woke up," I mean I became aware that my identity had been built on illusions and false beliefs about myself as a victim unworthy of love and acceptance. Like a house built of cards, those illusions came crashing down so many years ago.  In 2016 I entered another stage of awakening when I completely changed the way I work.

For over 20 years I had worked with my hands in an energy healing practice. Almost overnight, I had a deep knowing that I would no longer work with my hands, but would be working with energy online. This was not a conscious decision. It was as if I was being carried through this change by a force greater than myself.

Perhaps you've made a change in your life that involved ending something that didn't really make sense to anyone, maybe not even to yourself.  Perhaps you couldn't really justify the change in practical terms, but you just knew you had to do it, even if it involved a loss to yourself and others.

For a healer to stop working with her hands didn't make much sense to me either. Touching transmits energy and is an important aspect of healing. I am not suggesting that a healing practice that includes touching is better or lesser than a healing practice that transmits energy in ways that do not include touching. This article isn't about making such comparisons. Rather, it is about exploring the awakening process. In 2016 Spirit made it known that there were other plans for my life and I was simply responding to the call.

Something surprising happened when I made this change and started sensing and transmitting energy to individuals online. I felt suddenly free from limitations. No longer was I limited to sensing energy with my hands, or dependent on my hands. Nor was I limited to working with people within geographic traveling distance of my office. I have always used all my senses to track energy, not just tactile, but having the tactile removed expanded my other senses.

I still felt all the same things in my body as when my hands were on a client. My hands would feel warm,  I could feel energy moving through my body, and their pain would register in my own systems. But it wasn't until recently, when I picked up a copy of Women Who Run With the Wolves: Myths and Stories of the Wild Woman Archetype by Clarissa Pinkola Estes, PhD that I began to understand the transition that I had made. As I glanced at the table of contents, my eyes were immediately drawn to the last story in the book --  the tale of The Handless Maiden.

The Handless Maiden is a story told in varying versions in cultures throughout the world and throughout history. The maiden allows her father to cut off her hands to thwart the devil over a deal the father had unwittingly made to hand over his daughter. This mutilation initiates her descent into the underworld, or spiritual world. I immediately recognized the symbol in my own life. I had willingly cut off my healer hands. Like the handless maiden, I had traded my physical hands for spirit hands.

In the Intuit tradition, the motif of the Handless Maiden is conveyed through the legend of the goddess Sedna. Sedna is tricked into marrying an evil bird disguised as a man who promises to abundantly provide for her. But once he takes her to an isolated island, she discovers he can only provide enough for her to survive. Eventually her father rescues her, but fearing the stormy seas will capsize the kayak, he throws Sedna overboard. Sedna clings to the side of the kayak, refusing to let go. To save himself, Sedna's father cuts off all her fingers.

When Sedna's father cuts off all her fingers, she can no longer keep her grip on the material world.  She had no choice but to surrender to the spirit world, depicted in the myth as her sinking to the bottom of the sea.

When we've lost it all and our hands surrender their grasp of the illusion of the material world, we "descend into the underworld" like Sedna. This is a shamanic phrase that can be translated as entering the spiritual realm through the deeper self. From the icy depths, the spirit of Sedna became a symbol of endless prosperity, the wellspring of energy that awaits all of us when we connect with the spirit world.

Emergence of the Exiled Feminine

There is a large minor planet at the coldest and farthest edge of our solar system named after Sedna. Planet Sedna is so far removed from Earth in her 11,000 year orbit that she was not discovered until November 2003, and then not announced to the public until March 2004.

The astrology of planet Sedna represents the emergence of the exiled, suppressed feminine. As Sedna was revealed in our solar system, the exiled divine feminine has come to the forefront of our collective consciousness. I am seeing the influence of her "medicine" in my life and those I work with.

On the surface, what looks like loss and betrayal is an initiation of the journey to our soul.  There is something much deeper at work in our lives whether we are willingly letting go, or having loss seemingly imposed upon us.

If you feel drawn to end patterns in your life - whether that is a job, a relationship, a living situation, an illness, a belief...  - know that the spirit of Sedna may be at work in your life as well.  Loss can actually be the first step of an initiatory process of awakening that can connect you to endless abundance of energy, health, and love.

WATCH THE VIDEO VERSION OF THIS ARTICLE HERE. 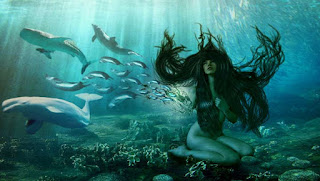 For more energy healing solutions for sensitive and creative women, subscribe to this blog and go to my website to subscribe to my newsletter and receive a FREE recording "3 Keys to Removing the Blocks to Getting What You Want in Life" and a power-packed Energy Medicine Resource Bundle with handouts for my most effective energy healing skills! While you are there, check out my award-winning books and energy healing online courses that can teach you everything you need to know to live a healing way of life and awaken your greater health.


Thank you for supporting this blog by using the amazon links embedded in this article for ANY purchase.  Your support is greatly appreciated!

Heidi DuPree, RN, CTN
I lift sensitive and creative empaths and lightworkers from turmoil to a higher vibration of health and harmony through my books, guided meditations and oracle cards. 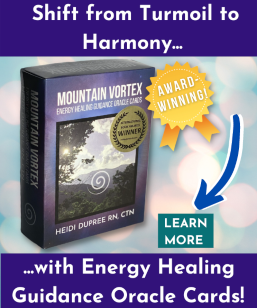 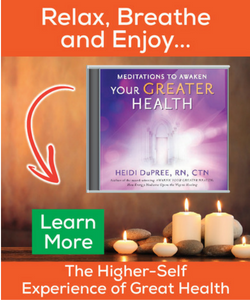 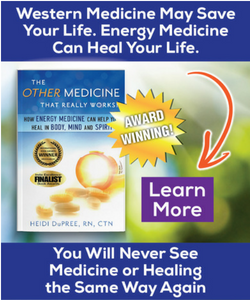 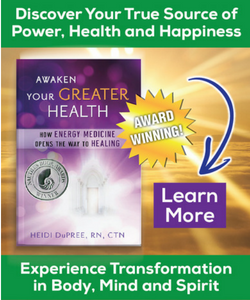 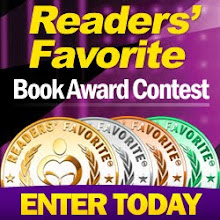